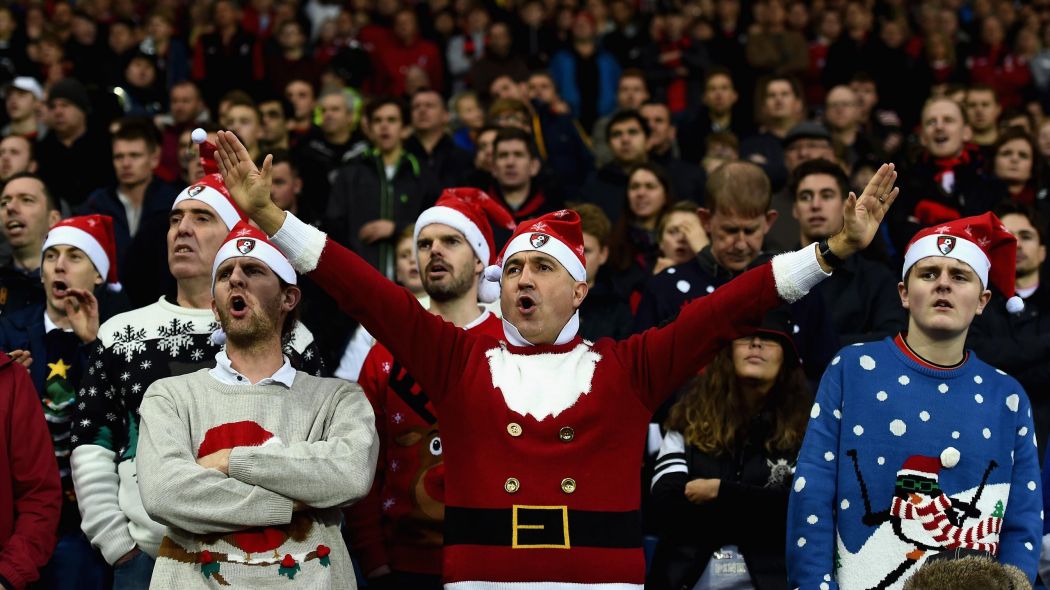 Much like how Americans have football on thanksgiving, the English have soccer on Boxing Day and it is one of the most anticipated days of the sporting calendar across the pond. Boxing day and Championship Sunday are usually the two only days that all 20 teams play on the same day, but on Boxing day they spread the fixtures across four different windows throughout the day, with one match this year coming on Thursday.

Matchweek 18 did not disappoint as there were a few big upsets and some interesting scorelines. City lost at home to Crystal Palace 3-2 to drop four points behind Liverpool, Chelsea lost at home to Leicester 1-0, United start off well with their new manager in a 5-1 whoop-ass over Cardiff and Spurs trounced Everton 6-2 at Goodison Park. Here’s how we stand on Christmas:

Realistically a two-horse race at the top between City and Liverpool until Spurs can prove that they can keep up with them. The race for 4th should be interesting between the two London clubs in Chelsea and Arsenal and the bottom three seems to be taking shape between Burnley, Huddersfield and Fulham. One thing to look for at the bottom is the goal differential, with Cardiff tied on -20 with Burnley and Huddersfield. Cardiff had -16 before their big loss on Saturday to United, which could hurt them if they get into that relegation battle later in the season.

Again I set myself back but a couple big upsets and few disallowed goals took my week from a possible +2 units down to -3.5 units. But I won’t stop because I’m married to the grind and there’s nothing more I want to do than bring that number back up.

Wolves @ Fulham (NBCSN) – This one sits at a pickem but with CRAZY juice on the side of Wolves. You can’t blame Vegas either since Wolves are just far and away the better side this season and have been pretty good away from home this season. In fact, Wolves have been averaging almost .4 more points per match away from home than Fulham have been at home. I like them here to get at least a draw. Wolves (Pick, -140).

Everton @ Burnley – Everton are coming off of a brutal 6-2 loss at home to Spurs where their defense looked totally lifeless. Life under Marcos Silva hasn’t been what they’ve wanted as they’ve allowed eleven goals in the last three matches and have now gone five straight without a win. Going into this match, Everton sit in 16th in the away table and haven’t won away from home since October 6th. Burnley haven’t been good at all either as they sit in the ‘last team out’ spot in the relegation zone, two points shy of safety. But I like the home dogs in Burnley here as they’ve had back-to-back tough matches in Spurs and Arsenal, both away from home, and showed that they can somewhat run with both of them. They covered against Spurs and were covering for 91 minutes at the Emirates until a late goal from Arsenal turned it into a push. I trust Burnley a bit more than Everton at the moment. Burnley (+0.5, -110).

Cardiff City @ Crystal Palace – Palace have been very intriguing at home this season, a place where they’re historically fantastic. That narrative briefly switched this season as they went winless in their first six matches at home, but it seems as if they have turned that around with two straight wins at Selhurst Park. And how are Cardiff away from home? Atrocious. They are 0-1-7 with their one draw coming at Huddersfield and are coming off of a brutal 5-1 loss to United. Even with the somewhat large spread, take Palace at home here. Crystal Palace (-1, +105).

Manchester City @ Leicester City – People are still wondering what happened on Saturday when Palace walked into the Etihad and took a 3-1 lead before City got one back to make it 3-2. Leicester had quite the opposite weekend as they went to Chelsea and won 1-0. Yes, I’m a City fan so I pick them a lot but it make so much sense here to pick them. Pep is brilliant at getting his teams back on track after a loss and I think he learned that he can’t play a mix and match squad anymore in the league as he did on Saturday. Leicester meanwhile are a team to fade after big wins, as they’ve only once had back-to-back wins (Wolves then Southampton in August). City are finally fully healthy and are expected to start Aguero, De Bruyne and Silva this Saturday. The spread is big but City know they can’t slip up as they’re now four points behind leaders Liverpool and will surely be starting those three stars together for the first time all season. Man City (-1.5, +105).

Huddersfield @ Manchester United – It seems as if United have finally found their form again with new manager Ole Gunnar Solskjaer, who is allowing them to play with comfort for the first time in years. Saturday was the first time United scored 5 goals in the last 5 seasons and the dressing room seems to have regained it’s swagger. They return to Old Trafford with a sense of hope for the first time in years and there will surely be less tension. I think Huddersfield have no shot in this one as they are 0-5 against the top 5 this season with a goal differential of -12 with only one goal scored. Now is the time to buy low on United. Manchester United (-2, +115).

Bournemouth @ Tottenham – Spurs have sneakily jumped into the title race after four straight wins in the league and only one loss in their last eight. They’re scoring goals at an exceptional rate with 19 in their last eight and their only losses this season have been to City, Liverpool and Wolves (Liverpool and Wolves losses coming in September). Bournemouth meanwhile are coming off of a good win at home to Brighton, but before that only had one win in their previous seven. So where to go with this line of 1.5? When in doubt pick the side who just won 6-2, in tremendous form, are home and have their best players scoring loads of goals. Tottenham (-1.5, -110).

Newcastle @ Liverpool (NBCSN) – Liverpool now have some breathing room at the top of the table and are surely to be fine against Newcastle here at Anfield. This one seems pretty easy. Liverpool are undefeated at home, have won by two or more five times out of their eight home matches and play a Newcastle side who haven’t beaten anyone in the top six this season. Although this can likely push, it could also very easily get away from Newcastle. Get this line before it goes up to 2.5. Liverpool (-2, -120).

Arsenal @ Brighton (NBCSN) – Brighton seem to be in a bit of trouble as they are currently on a 3-match losing streak while Arsenal bounced back after losing their previous two, with a win at home to Burnley. But there are a few things that worry me about Arsenal in this match and Brighton have been very streaky this season. Brighton went on a three match win streak, followed by a three match winless streak, then followed by a three match undefeated streak and now a three match losing streak. They’re due to get back on track and they’ve actually played well enough to cover against United, City. Liverpool, Spurs and Chelsea this season. To add to that, Arsenal’s back line has been weak as of late and Brighton have score in all of their home matches this season. I think a one-goal spread is a bit much for this match. Brighton (+1, -125).

Chelsea @ Watford (NBCSN) – Watford finally seem to be back on track after a run of interesting form in November/early December. After going winless in five matches in that span (three of those matches to City, Liverpool and Leicester), they’ve bounced back with an away draw at Everton, a home win to Cardiff and a big away win at West Ham this past weekend. Chelsea meanwhile are coming off of a home loss to Leicester and have only won by more than one goal once in their last six. The spread is heavily juiced for Chelsea as they are favorites by 0.5 but some places are offering a one-goal spread in this one with Watford receiving the heavy price. I’m willing to pay the price for that bigger spread and trust Watford to hold Chelsea a bit. Watford (+1, -140).

That’s all for Boxing Day’s slate of Premier League matches! I hope everyone has a Merry Christmas!!

Don’t forget to SUBSCRIBE AT THE VERY BOTTOM OF THE PAGE!!!

One thought on “Boxing Day Special”