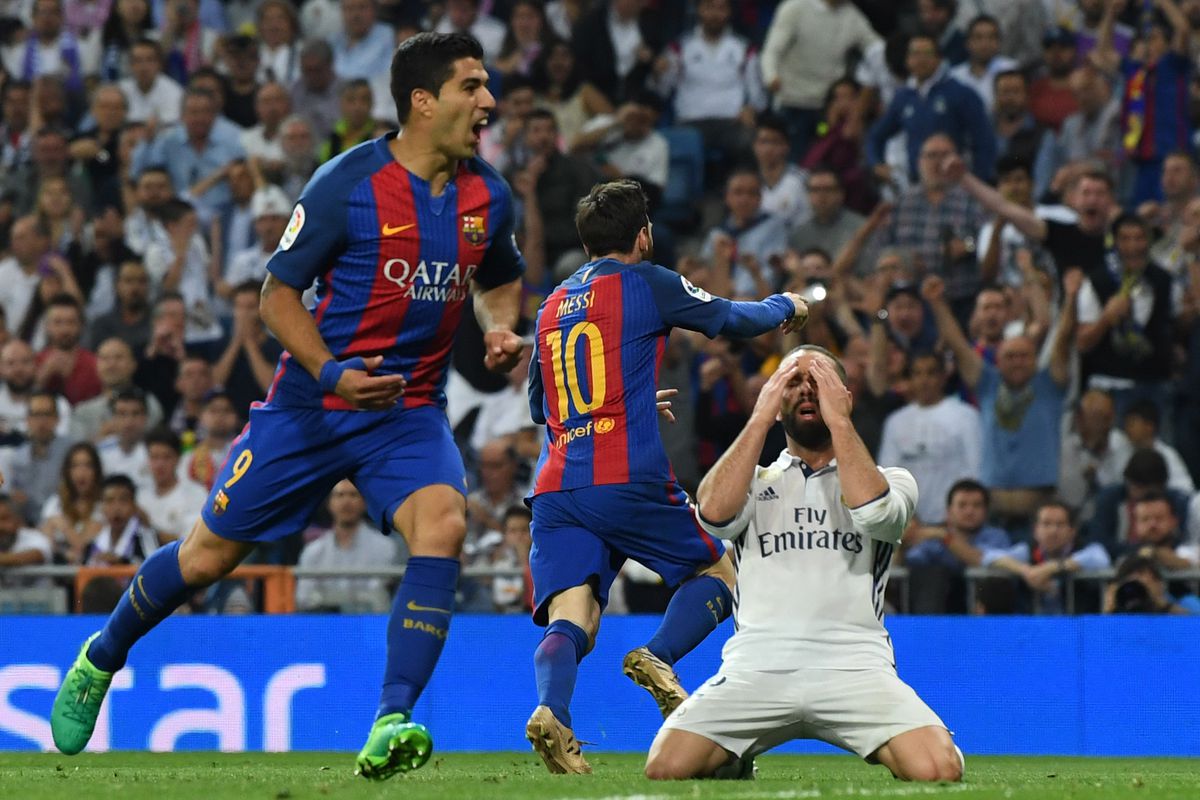 It’s always a treat to have some midweek soccer and an El Clasico. There are a few huge Premier League matches as well but let’s get into what happened over the weekend first.

Sadly the two big matches of the weekend were duds as United/Liverpool ended 0-0 with several big injuries and the Carabao Cup Final was 0-0 until penalties, where Man City prevailed. Although the Final did have the Sarri/Arrizibalaga drama where the Chelsea goalie refused to be subbed off before the penalty shootuout in one of the more bizarre things I’ve ever seen.

But the clear winner of the weekend was Man City as they won a Cup Final and Liverpool’s draw meant that they sit only one point behind the reds in 2nd place with the same amount of matches played. It’s now a race to the finish for both clubs.

Everton @ Cardiff City – I can’t believe I’m doing this but I’m taking Cardiff. In theory and on paper I’d usually like Everton in this match but I’m going to take the home underdog who need points desperately. Cardiff are coming off of a brutal 5-1 home loss to Watford and I think there will be a lot of pressure and expectation Tuesday for them to get a result here at home. They go against an Everton team who actually hasn’t played in over two weeks due to rescheduled fixtures and since they’re out of both cups. Everton have also had three straight losses in the league and have lost five of the last six in all competitions. They’ve had one away win since late December and only have three wins in thirteen this season away from home. Gimme some of that home dog. Cardiff City (+0.5, -125).

Wolves @ Huddersfield – Oh one of my favorite teams to bet on faces my least favorite team to bet on? Check. The worst team in the league by a long shot this season versus a team who’s tied on points for seventh? Check. A team with one single point since the start of December against a team with 24 points in that same time span? Check. The fact that wolves aren’t favored by a goal here blows my mind and I absolutely love them as small favorites here. Wolves (-0.5, -120).

Brighton @ Leicester – Leicester sacked manager Claude Puel this week after four straight home losses and they’ll face a Brighton side who have only played two Premier League matches this month with their last win in the league coming in late December. Adding to that, Brighton’s last win away from home in the league was against Huddersfield earlier in the same month. I do sometimes like taking teams with new managers or caretaker managers as there’s always a new feeling around the club especially at home and I also think fading Brighton here is the smart move. Leicester City (-0.5, +105).

Burnley @ Newcastle (NBCSN) – Burnley have been on fire in the last few months as they’ve only had one loss in their last ten matches, coming against City in the FA Cup. In the league specifically, they’ve had two wins in a row and are undefeated in their last eight. They face a Newcastle team who are in decent form with only one loss in the league in their last six, but only one of their three wins in that span stood out (to City). Their two other wins were against relegation candidates and Newcaslte now sit only four points above the drop zone with their foes Burnley right on top of them two points ahead. I’m going to ride Burnley’s wave as underdogs in a match that could very well end in a draw. Burnley (+0.5 -125).

Bournemouth @ Arsenal – Don’t look now but the Gunners are back where they belong in fourth place and are in great form, especially at home. They’ve won six straight and haven’t lost to a team outside the top six at the Emirates this season. Bournemouth have played well at points in the season but away from home, especially recently, they have been dreadful. The last time they won points (win or draw) away from home was against Fulham in October and have lost their last five away matches against the top six by at least two goals. Take the hot home squad here against an inconsistent Bournemouth team. Arsenal (-1.5, +115).

Fulham @ Southampton – “Ah the shite game of the week”, said the uneducated soccer fan who sees 18th place Southampton matched up against 19th place Fulham. Meanwhile I can’t wait for this match for several reasons. First of all, there will probably be goals and if I didn’t suck at betting over/unders I’d probably take the over at 2.5. Second (which may hurt the first point and add to the fact that I suck at taking over/unders), relegation battles make for very intense and tight matches, sometimes resulting in teams refusing to concede and keeping it low scoring. Lastly, this may be Fulham’s last chance at survival as they can close to gap to three points on Southampton and this is Southampton’s chance to possibly get out of the relegation zone and further distance themselves from Fulham. I’m going to take the home side with the hope that they take advantage of this huge match at home. They know that this is one of two remaining matches against relegation candidates and they need to get the points if they want any chance at staying up. I like the home team in this toss-up. Southampton (-0.5, -105).

Tottenham @ Chelsea (NBCSN) – Probably the match of the week in the Premier League as Spurs will travel across London to face a Chelsea team in complete disarray. Their last few weeks have included a cup loss to Spurs, a league loss to Arsenal, a league loss to Bournemouth, a 6-0 league loss to City, a 2-0 FA Cup loss to United and a Cup Final loss to City in penalties. The dressing room is in shambles with Sarri’s fight with keeper Arrizibalaga further driving that narrative and they’ll be more than gassed for this match after going the distance against City on Sunday. Yes, Spurs’ run of form ended abruptly with their loss to Burnley (with a few questionable referee decisions) but they’re in miles better shape right now than this Chelsea team. To put them as underdogs here is dicey by Vegas and I’m going to try to make them pay for it. Tottenham (+0.5, -135).

Manchester United @ Crystal Palace – Remember when I mentioned the injuries in the United/Liverpool match? Well United had to make three subs due to injury in the first half alone, subbed Lingard on in the 25th and had to take him off just 18 minutes later and Rashford had to play most of the game pretty injured. The rumor is that they may be missing nine first team players for this game and they’ll have to travel to a Palace team who haven’t lost in their last six matches in all competitions and are coming off of a big away win at Leicester by the tune of 4-1. The line is super juiced but I think taking them as underdogs is the right decision. I can’t trust them to win the match outright and I don’t want to take them at a pickem and get nothing out of a draw. Crystal Palace (+0.5, -140).

Watford @ Liverpool – Watford have won their last three matches in all competitions and their only loss in 2019 came away against Spurs. They’ve been playing brilliantly and their form over an even larger span is even better with only two losses in their last 15. Although Liverpool are a much better team on paper, they haven’t shown what they can really do in the last few matches. Yes they’re undefeated in their last seven, but with only three wins and only one win by more than one goal. They have also only scored more than one goal twice in 2019 (nine matches), which is very unlike a team who is that stacked up front. I don’t think they’ll drop points but I don’t see them running away with this result against a Watford side who has only conceded more than one goal once in their last nine matches. I’ll take the points. Watford (+1.5, +105).

West Ham @ Manchester City – City are coming off of their big Cup Final win but this match might be trap game for them. It’s always tough to refocus after celebrating a Final victory and they’ll be hurting from the lack of rest and injuries to Fernandinho and Laporte. I think they’ll take the three points but this is a West Ham team who drew Liverpool just a few weeks ago and are undefeated in their last three. It won’t be easy for City especially due to the type of week they’ve had, and I’m going to take the points with West Ham to be safe. West Ham (+2.5, -125).

FC Barcelona (1) @ Real Madrid (1) – Wow, we get an El Clasico smack dab in the middle of the week only a few days before they play each other in the league on Saturday. After Real Madrid’s big draw in Leg 1, they should feel confident going into the second leg right? But they’ve had a few shaky results since their win against Atletico after that Leg 1 win. Their last three matches have been interesting with a tight 2-1 win at Ajax in the Champions League, a 2-1 loss at home to relegation candidates Girona and a 2-1 win at Levante this weekend where they needed two penalties to win. For Barcelona, who had Messi starting on the bench in Leg 1 due to injury troubles, have had two wins and two draws since that first leg. But what makes me the most confident about Barcelona in this match is that they’re coming off of a big win to Sevilla where they came back from being down twice and Messi had a hat trick. If Messi is in good form going into an El Clasico, then you just can’t bet against Barcelona on a pickem. He also happens to be the best player in Copa Del Rey history with a long track record of scoring big goals in big games in the competition. Not only do I not want to fade Messi, but I can’t fade a Barcelona side who’s consistently been a top 3 team all season long. Madrid have been too inconsistent and don’t give me enough confidence to commit on a pickem line. FC Barcelona (Pickem, -120).

That’s all for this week’s preview! Don’t forget to subscrube to get updates every time I post and to follow on social media