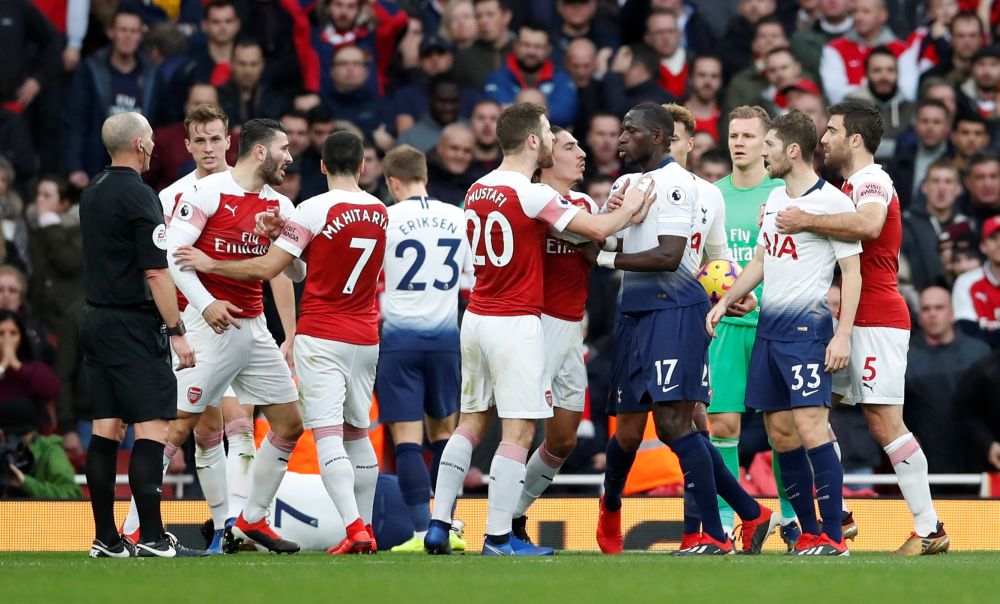 What a slate we have for you this weekend in European soccer. Two huge matches, one massive derby and a full slate in England before the international break. If you missed last Matchweek’s recap you can find it HERE. Another solid weekend for me…

We’re averaging 2.5 units of growth per week so far. Let’s dive right into it.

Manchester United @ Southampton (TV: NBCSN) – United will look to redeem their embarrassing home loss to Palace last weekend by playing another possible relegation candidate away from home in Southampton. I have little to no hope in United getting a result right now. They look uninspiring going forward, their midfield relies too much on Pogba and their defense is leaking like a punctured tire (2 goals to Palace who hadn’t scored all season). Southampton had a pretty rough start to the year but since their first two losses they’ve won one in the league at home to Brighton and another away from home at Fulham in the Carabao Cup. They were great at home last season and I’m going to take a risk and take them as home dogs here. Southampton +0.5 (-125).

Sheffield United @ Chelsea (TV: NBCSN) – Shockingly, Sheffield are 4 spots above Chelsea in the table through three matchweeks, but with the same amount of points. Chelsea’s defense has been one of the talking points for their season so far, as they’ve conceded 7 goals in 3 matches, and it’s surely something that will grow once they play more together. Sheffield meanwhile have only conceded 3 goals in the same amount of matches, but those matches were against Bournemouth, Palace and Leicester with their only loss coming against the only real competition in Leicester. That worries me. I like Chelsea to find their footing here at home and stable the ship in a solid win against a team that has yet to prove themselves against the big boys. Chelsea -1.5 (+115).

Aston Villa @ Crystal Palace – It took 3 matches but Villa finally got their win. They took down Everton at home by the tune of 2-0 and they looked like the team that we all expected them to be going into the season. They were clicking on all cylanders and didn’t show the defensive holes that they showed in the second half against Spurs and against Bournemouth. Palace meanwhile had that huge win at United, their first win at Old Trafford since 1989 and first win against them at all since 1991. I love betting against teams coming off of outlier results, as they usually regress back to their normal form. Another reason to fade Palace is the fact that they went the distance and lost in penalties against fourth division side Colchester United on Tuesday, surely giving their starters some heavy legs. I’ll take Villa and the points. Aston Villa +0.5 (-135).

Bournemouth @ Leicester City – You might want to get used to me picking Leicester, as they’re going to be who Wolves were from last year. Vegas will likely undervalue them constantly and in some matches they’ll be perfect to pick. This is one of those matches. Bournemouth are a team that haven’t shown us much outside of a win at Villa where they scored a 2nd minute penalty and a 12th minute deflection and flipped the game on its head. Leicester going forward are dangerous and they’ve been solid at the back even without Maguire. I like Leicester here who I think can run away with this one. Leicester City -0.5 (-135).

Brighton @ Manchester City – Brighton picked a bad time to get their first loss of the Premier League season as they lost at home to Southampton 2-0 after going man down at 1-0. City meanwhile didn’t have their most convincing performance last week but they still beat Bournemouth 3-1, a sign that this team might be starting to wake up. This will be City’s first ‘easy’ home match as the only other one they’ve had this season was Spurs where they drew 2-2. I think you’d be an idiot to fade City here as they’ll have a lot to prove before going into the international break. I fully expected this line to be 3 goals instead of 2.5 but here we are, Vegas undervaluing City at home against a relegation candidate from last season. I’m going to double down on the champions. Manchester City -2.5 (-130) 2 UNITS.

Watford @ Newcastle – Ugh. I really don’t want to pick this match. Neither of these teams are betting material even after Newcastle’s win at Spurs last weekend. It was an outlier and they not only won’t produce that performance again but they got lucky with Spurs’ team and tactics in the match. Watford meanwhile are the only team without points now and they have a goal differential of -6, 4 worse than anyone else. But two things stand out to me in this matchup. First, like I just said, Watford are without points so far this season but they will also be playing 4 top 7 sides over their next 5 league matches. They know they need points here. The other point is that even though both of these teams played this week in the Carabao Cup, Newcastle are now banged up as Saint-Maximin, Joelinton and Almiron all picked up knocks. I’m going to go contrarian here and take Watford on the pickem line as I think they pick up their first points of the season. Watford Pickem (+105).

Norwich @ West Ham – Norwich showed up against Chelsea even in their 3-2 loss, playing their ‘shootout’ style of football. West Ham have turned it around a bit since their 5-0 loss to City to start the season with a win against Watford last weekend and a draw at Brighton the week before. This one is tough because both of these teams like high-scoring games, but Norwich’s defense is becoming too much of a concern right now. They’ve conceded 8 goals through 3 matches so far this season and there’s no way that’s sustainable. West Ham torched Watford 3-1 last weekend and I think that’s an exact replica of what can happen here. I’ll take the hammers at home. West Ham -0.5 (-115).

Liverpool @ Burnley (TV: NBC) – Liverpool’s fast-paced, attacking, heavy metal football works against most teams in the league but I expect them to have trouble here. Burnley are known for sitting back and absorbing pressure while hitting on the counter and capitalizing on set pieces. They’ve averaged 37% possession this season but averaged over 13 shots per game. They’ve still been very effective without the ball. Liverpool have won all three games this season but none of them have been that impressive to be honest. Norwich played them really tight in the second half of the first game, Southampton kept it close in a 2-1 game and Arsenal could’ve had a chance if Emery didn’t mess the game up both tactically and in the starting lineup. Burnley meanwhile are 1-1-1 with their win coming in their only home game by the score of 3-0, their loss was 2-1 at Arsenal where they had 32% possession but had 18 shots and their draw was away to Wolves where Wolves needed a last-second penalty to equalize. This game might be tricky to navigate for the Reds so I’m taking the points. Burnley +1.5 (-115).

Wolves @ Everton (TV: NBCSN) – This is the classic ‘prove it’ game for both teams. We’ll find out a lot about them as they’ll likely be fighting for the spots outside of the top 6 and this game could mean a lot down the road. But as of now, Everton sit in 12th and Wolves sit in 15th and both are needing 3 points if they want to be taken seriously. Wolves though, are starting to tack on some serious miles as they’ve played seven competitive matches since August 8th, where as Everton have played four. But the fact that Wolves are unbeaten in those seven matches and Everton have had trouble against Palace, Watford and Villa says a lot. Wolves have remained consistent through a tough schedule while Everton are yet to find their identity. I like Wolves if they’re going to be disrespected as underdogs here. Wolves +0.5 (-130).

Tottenham @ Arsenal (TV: NBCSN) – The North London Derby is my favorite match in English football as these two teams, and supporters, don’t like each other in the slightest bit. Both of these teams find themselves in some sort of flux right now though. Spurs lost to Newcastle at home last Sunday who were (+1050) to win the game. They didn’t start Eriksen again and there was very little creativity going forward to feed Kane. Arsenal went to Liverpool and lost 3-1. They played a diamond in the midfield against Liverpool which made little to no sense and Emery refused to adjust after Liverpool were suffocating them with the press in their defensive third. So who can turn it around in the biggest game of the season? Well Spurs haven’t gone to Arsenal and won in the Premier League since 2010 and Pochettino said after the Newcastle game that Spurs “aren’t a happy camp” and that “squad uncertainty is damaging the club”. I trust Arsenal here at home as long as Emery can put out the proper lineup and adjust to the press this time, which I think he will have learned from his mistake. I’ll take the Gunners. Arsenal Pickem (-120).

Napoli @ Juventus – It’s been the Napoli/Juve show for the last few years in Serie A, with Juve coming out on top more often than not. This past weekend though, Napoli had shootout win against Fiorentina where their offense impressed but their defense let in 3 goals. It was a totally open match where both teams had plenty of chances. Juventus meanwhile squeaked away with a win at Parma where they were far from impressive and needed a Chiellini goal early in the game to get them the 3 points. They were instead much more compact and focused on not overextending themselves. I think Juve will take a bit to get used to Sarri’s demands while Napoli already look to be succeeding under Ancelotti, especially offensively. I’ll take the points here as I think Napoli can keep Juve at bay much like Parma did and possibly get the draw. Napoli +0.5 (-110).

That’s all for this weekend! If you’re reading this in the States enjoy your Labor Day weekend!